The Coronavirus years have not stopped us painting but it has been a very long time since I posted anything here.  We are currently planning the second exhibition by British Plein Air Painters being held at the Mall Galleries 7-12 September 2021.  This is the link to our site: https://www.britishpleinairpainters.co.uk/

I am submitting about a dozen paintings - maybe a few more if I am allowed!

If you are interested in any of these I can keep them back, otherwise they will go into the show catalogue in about a week's time.

We started in reasonable weather on the 9th of April at Praia dos Tres Castelos, just West of the Praia da Rocha town beach.  Against the light.


We then moved on into Portimao and across to Ferragudo.  I tried a small sketch of the squall developing behind the town:

After lunch I went round to the seaward side of the town to paint the old fort with its chapel.  The 6x8 trial was followed by a bigger version.

It rained and howled over night and by breakfast time the next day we decided to stay put and paint indoors.  My room, which was large with skylights, became the still life studio.  We grabbed some material from the garden in between downpours and found some china.  John and I plodded on with studies of roses and jugs while the others went to town to buy a range of fish for sketching first and eating later.


The 11th April looked more promising but we decided not to travel too far.  Praia da Dona Ana has endless possibilities and this time we set up to the West, looking East.

Praia da Camilo is a short walk away and after a quick lunch we split up to try different views.  I attempted a 'vertical long thin' that did not quite come off but with some compositional changes and cropping might be OK:


A short walk to Ponte de Piedade provided the chance to paint this arch from a high point.  (The others went down below this point to paint another arch across the Praia da Camilo beach.)

We went home all rather tired but I could not resist a final 6x9 from the cliff top below the villa.  I just love those jutting rock formations.

Our final day was the 12th April and again the weather was bad, so John and I set up our roses and lemons again, adding in a few more flowers and some clementines, to paint this:

The weather had brightened a bit so after a quick snack we went into the garden.  At first I tried a view looking West to the distant sea but put it to one side and came back to the villa for a final go at the garden:

By then it was 5pm and time to pack and drive to Faro.  We had a late flight but a whole series of delays made my journey home last until 5.30 am the next morning!  Despite the frustrations with the weather it was a hugely enjoyable trip with a generous host, good friends, a great deal of laughter and fabulous villa and gardens.  I always learn new things from my colleagues and painting with them is a great joy.

On my return from a wonderful trip to Venice in October I posted on Facebook a selection of the paintings I brought back.  This post provides a more complete record of the trip.

David Bachmann, Jonathan Pocock and I had a mid-morning flight from Gatwick on Saturday 7 October but despite the prospect of getting in one or two quick sketches on our arrival in Venice we had long waits at various stages including at the new Alilaguna terminus so did not get to Ken and Dora Howard's apartment until the evening.  Messrs Karl Terry and Tony Dakin were out painting already, near SS Giovanni e Paolo.

I had a bad first night but managed to creep out at 6am and made my way down to the Ca D'Oro vaporetto stop only to discover that the lovely red awnings of yore had been replaced by some 'dirty maroon' ones.  We all went to that spot later but it only has room for one of us so I took a '1' to St Angelo and walked through to the Accademia and kicked off with this 9x12 of the classic scene. 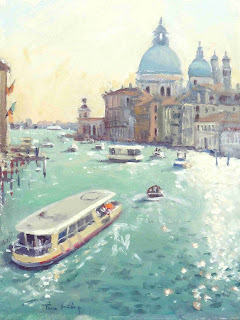 I then took a '1' to San Zaccaria and a '2' to San Giorgio Maggiore.  I knew that there was a café with a loo on the marina side of the island and having availed myself of that I did a quick 6x8 of the marina, following that with three 6x13 studies of the Salute from the San Giorgio platform, two of which are here: 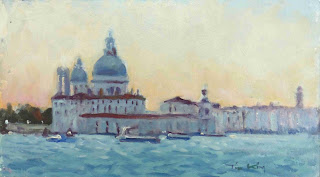 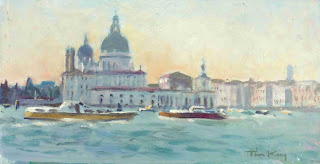 I was so late back that the others had already gone out for a meal. Willis Heaton joined us (all the way from Santa Barbara) and that completed the party for this year.

The next morning we were in better shape and made straight for the San Marco piazza.  I did a 6x13 of the Dogana and Salute from just below the Straw Bridge.

I was very slow and the others had left for the 'Orange Wall' long before I finished.  I looked at the wall but was too late for the classic scene so went back to Campo S Maria del Giglio and painted a shop front down the square (12x9). 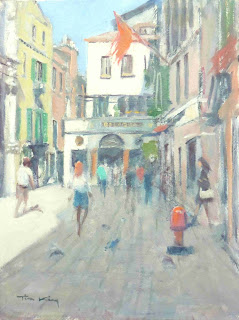 I took a '1' to San Tomá and had a quick lunch in Bar Niki before returning to the Campo to start another 12x9 but abandoned that, went to the Orange Wall fondamente and did a barely OK 9x12 that I scrubbed later.

On Tuesday morning I finally started to feel I was tuning in to Venice and after the horrific incident when David had his tripod stolen and we had searched frantically but with no success for the thief, I set off on my own for San Giorgio Maggiore.  From a tiny platform at the vaporetto stop I did a 6x13 of the view along the Giudecca to the Zitelle and Redentore. 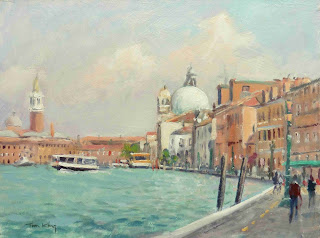 Back on a '4.1' to San Zaccaria for a contre jour 9x11 of the San Giorgio Maggiore and a similar view of the Salute from a spot nearer the Arsenale. 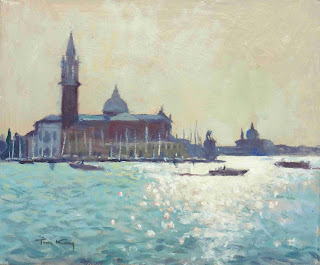 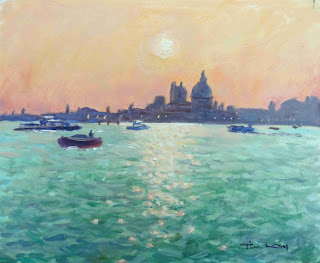 Wednesday dawned foggy and stayed that way until noon.  Karl, David and I were on our way to San Marco when Karl The Fogmaster spotted this scene (12x9: 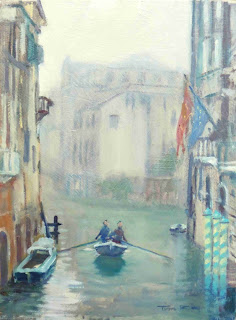 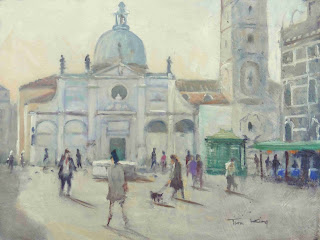 After a brunch back at Ken's we returned to CSM Formosa for another go: 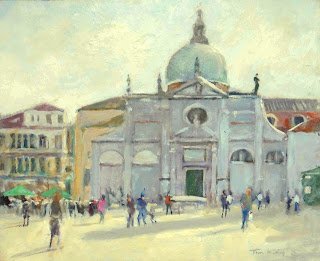 Rushed to CSM del Giglio and finished the second painting I had started there on Monday. 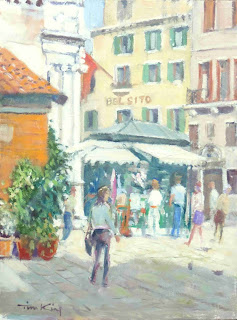 I finished with another classic view from Campo San Leo 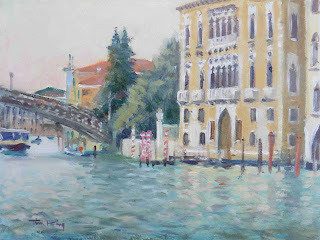 On Thursday morning I woke with my back in spasm!  I have no idea why.  Normally I have a very definite 'episode' but this time the old Army back just seemed to creep up on me.  That made the rest of the rip excruciatingly painful but I was determined not to let it slow me down too much.

I started badly, taking a 4.1 before realising it was heading for Murano.  I stopped at the Isola San Michele and did an 8x6 study of the church from the vaporetto stop.  Then back on a 4.1 all the way round to Redentore where I did a 9x12 of Zitelle/San Giorgio in the mist 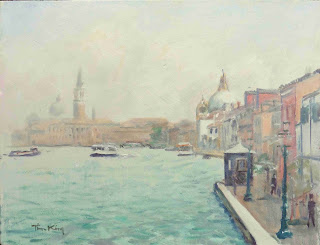 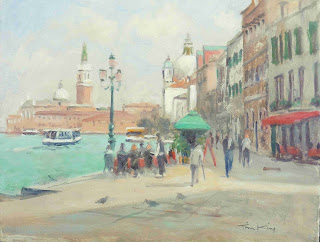 I walked to Zitelle and took a '4.1' to Biennale (Giardini Publici).  I think the 6x13 I did from her in evening light was my best of the day,

On Friday 13th I was still having a lot of trouble with my back but struggled out to Campo SM Formosa for a 'Homage To Bernard Dunstan' view that he had painted many years ago and I found in a book about him.  He had a very long innings but it was still sad to hear of his death. 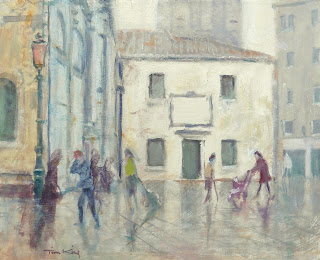 I was not happy with it and have since modified it considerably.  It was still very grey so I went back to the apartment and David and I spent the rest of the morning working on sketches.  I struck out on my own again after lunch and took a '2' to San Tomá from Rialto to do a misty view up the canal again (6x13)

The gondola is actually a traghetto one but only the gondoliers stand up in it these days.

I popped into Bar Niki for a coffee and said goodbye to Elisa and her mum before heading to San Zaccaria on a '2' and then Salute on a '1'.  I walked out to Punta Dogana and settled for a 6x13 of the Redentore with 'sparkle'

Then after trying to help Commie from Dundas Ontario (!) I took a '1' to the Arsenale and did another San Giorgio with sparkle (9x12) 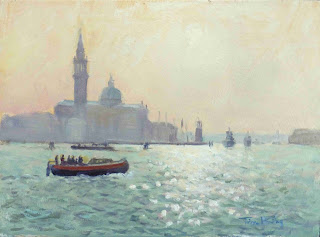 I dashed to the loo at the Giardini and then stayed there for a final 9x12 of the San Giorgio and Salute after sunset. 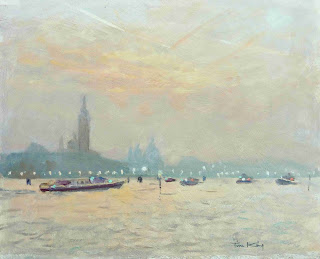 That was my last oil sketch but my flight back on Saturday was quite late (and was to be delayed by several hours) so although we had to leave Ken's flat by noon I had the opportunity for several, local  pen-and-wash sketches and two small watercolours, one from the Ospedale stop and one from the Cimitero stop on Isola di San Michele. 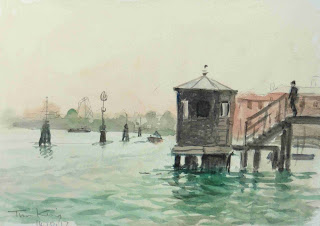 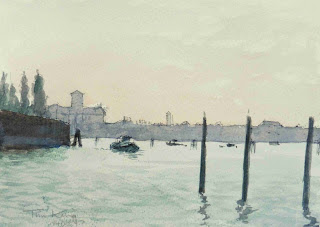 Despite the bad back and a nightmarish journey home I had enjoyed a great week.  What always makes these trips is th company of good friends from whom one can learn so much.

Probably the nicest thing that happened to me was when Karl - who knew that I had kept a small half-finished sketch of his from another Venice trip when he threatened to destroy it in a fit of frustration - gave me a lovely 'fog' painting on his last morning, on the condition that I would finally destroy the other one.  It is now framed and proudly displayed in our home.

tim king
I am a plein air painter, working mainly in oils but also acrylics and pastels. I enjoy the struggle of working outdoors. I have learned so much from other outdoor painters and they make great friends!